Mimi Gochman Celebrates her Birthday with a Win in the $10,000 Equitation Championship presented by Palm Beach Academy at the Hampton Classic 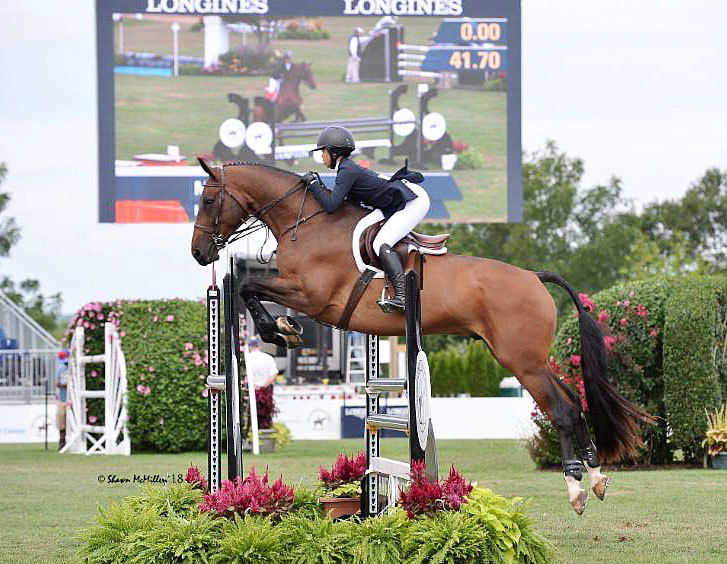 Following two rounds of competition Saturday at the Hampton Classic, Mimi Gochman of Palm Beach, FLA came out on top in the $10,000 Equitation Championship presented by Palm Beach International Academy.

Gochman, who was celebrating her 14th birthday on Saturday, received a first-round score of 92 and a second-round score of 95, to finish with an overall total of 187 points. Second place was awarded to Daisy Farish with a final total of 184 points, and third went to Madison Goetzmann with 182 points. 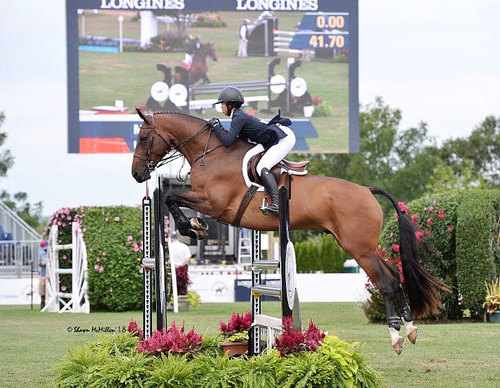 The natural obstacles of the bank and open water in the first round were no issue for Gochman, nor was the tight time allowed in round two.

“My plan was to post a smooth round, to answer all the questions,” said Gochman after the class. “I hoped that if I kept a consistent pace and got the strides and distances, I would have a good chance to be in the top three. My horse loves the natural obstacles so I wasn’t as concerned as I was about being able to package his huge stride to fit the one short line on course. Thankfully he came right back to me when I asked.”

Gochman’s trainer, Stacia Madden of Beacon Hill Show Stables, identified a few key elements which set this championship class apart from what the riders have seen the rest of the year.

“It’s very different from what the riders get to experience during the year. It has a lot of good questions,” explained Madden. “We’re getting ready for the USET finals and this has a little bit of the same flavor with the water jump and some of the natural jumps.

“A lot of these kids don’t get to practice on grass very often. This is the first class and the only class in the year where they jump the bank, and a real open water jump – it’s not just a plastic tray on top of sand. It’s dug in, it’s real water and the stones in front are a bit spooky. It was a real challenge today.”

Commenting on the class following the prizegiving, judge Jack Towell of Camden, SC, talked about what set Gochman apart today, in a class full of exceptional young riders.

“What we really like to see is as much control at the end of the course as at the beginning of the course. In the first round, with the bank and the natural obstacles, that became a challenge.

“In the second round – they were thinking about their time allowed. Especially the young lady who won, she just kept riding forward smoothly. She wasn’t worried about having a rail.”

Course designer for the grand prix ring, Michel Vaillancourt who was judging the class alongside Towell, described in detail how the time allowed affected the outcome.

“We took into consideration the time allowed – they are supposed to go at 400mpm which is extremely fast. It prepares them for the real world, they have to learn how to use the corners and use the space that they have in order to make up that time, while still riding the lines technically correct. I think the top rider really produced that today.” 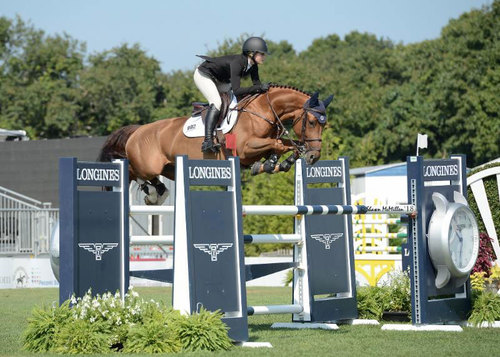 The $12,500 Amateur-Owner Jumper Classic was won by Samantha Wight, riding Edison. They received the Firefly Trophy, donated by Philip Richter of Turnabout Farm in honor of Christophe de Menil, for the win. Second went to Kiva Iscol with Marshmello and third went to Victoria Ketchum with Kelly CF. 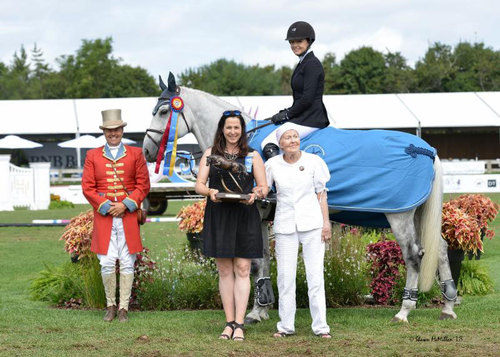 The Firefly Trophy was presented to Samantha Wight with Edison by Shanette Barth Cohen and Christophe de Menil. © Shawn McMillen

In the Anne Aspinall hunter ring, Becky Gochman and Catch me took the championship in the Hunt Ltd. Amateur Owner 36+ hunters, as well as the reserve title with Dominik.

In the GiGi New York Amateur-Owner Hunters, 18-35 years, Jef Lauwers and Sutherland were awarded the championship with Kelly Tropin and Chablis taking the reserve.

Sunday, September 2 is Grand Prix Sunday at the Hampton Classic.The $10,000 Hermès Hunter Classic is the featured competition in the Anne Aspinall ring, followed by the presentation of the Grand Hunter Championship and Leading Hunter, Junior Hunter & Rider and Junior Equitation awards.

Festivities in the Grand Prix Ring begin with the $25,000 DAWTS Jumping Derby followed by the grand finale –the $300,000 Hampton Classic Grand Prix CSI**** presented by Douglas Elliman. The $30,000 LONGINES Rider Challenge will also be awarded. Competition starts at 10:00 a.m.