Shane Sweetnam is Tops Two Days in a Row, Taking the $70,000 LONGINES Cup CSI4* at the 43rd Hampton Classic 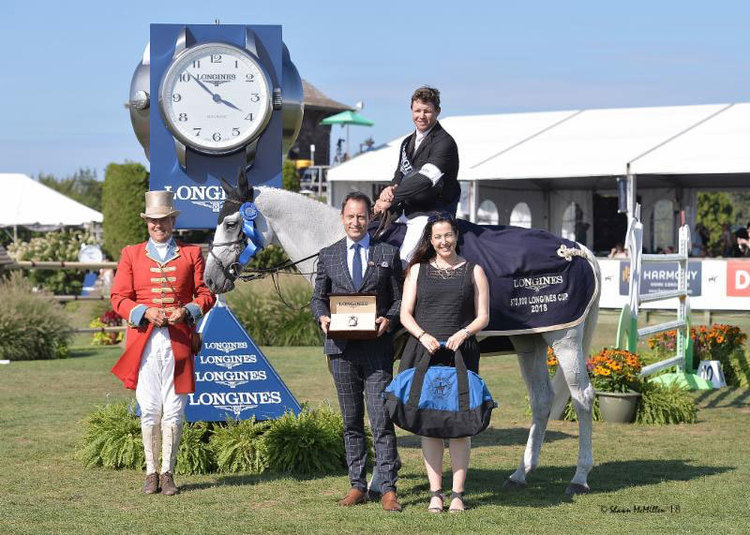 The Irish flag flew once again the Hampton Classic for Shane Sweetnam, after he won Saturday’s $70,000 LONGINES Cup with Indra van de Oude Heihoef, owned by the Blue Buckle Group. It was also two years in a row for Sweetnam, as he won this class in 2017 with another of his top mounts, Main Road. 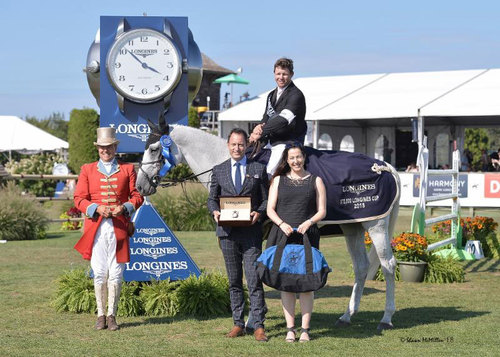 Just five of the 33 horse-and-rider combinations that attempted the course designed by Canada’s Michel Vaillancourt were able to post clean rounds and progress to the jump-off.

America’s Spencer Brittan, 20, and Uncle Blue were first to jump off, and they went for the safe clear, hoping a clean round would keep them close to the top. Peter Lutz was next with Sam, who unfortunately lowered the last jump on course. Canada’s Mario Deslauriers went third, with the youngest horse in the LONGINES Cup, eight-year-old Amsterdam. They would eventually finish in third place with a clean round in a time of 38.53 seconds.

Sweetnam was next to go, and if Indra van de Oude Heihoef was tired from Friday’s efforts, she didn’t show it. They put in a foot-perfect round to jump clean in a time of 36.61 seconds.

Second place finisher and four-time winner of the LONGINES Rider Challenge at the Hampton Classic, Richie Moloney jumped last with Rocksy Music. They too jumped clean but were not able to catch their teammate’s time, finishing ever so slightly off the pace in 36.90 seconds.

Sweetnam has nothing but praise for the 10-year-old mare Indra, who jumped her first grand prix at the Hampton Classic one year ago.

“She’s super talented,” Sweetnam said, stating the obvious. “She showed real heart and desire to get the job done two days in a row. Last year was her first grand prix, here in the Hamptons, and she’s really a bright light for the future.”

“It’s wonderful what the Hampton Classic is doing for charities,” Sweetnam commented following the class. “I’m delighted my success is helping people elsewhere.” 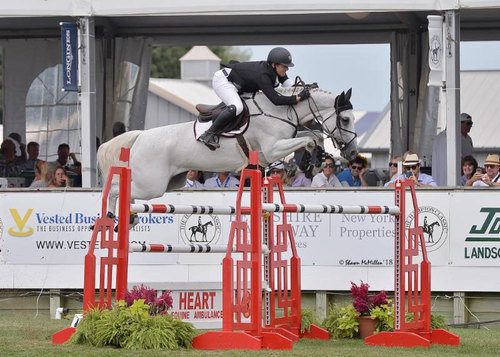 Update on the $30,000 LONGINES Rider Challenge:

Sweetnam holds onto the lead with 405 points. Moloney sits in second with 294 points and Mexico’s Santiago Lambre is third with 220 points. The Challenge will be awarded Sunday, following the $300,000 Hampton Classic Grand Prix presented by Douglas Elliman.

Sunday’s featured hunter competition in the Anne Aspinall ring is the $10,000 Hermès Hunter Classic. It will be followed by the presentation of the Grand Hunter Championship and Leading Hunter, Junior Hunter & Rider and Junior Equitation awards.

Festivities in the Grand Prix Ring begin with the $25,000 DAWTS Jumping Derby followed by the grand finale –the $300,000 Hampton Classic Grand Prix CSI**** presented by Douglas Ellimanwhich will begin at 1:00pm.