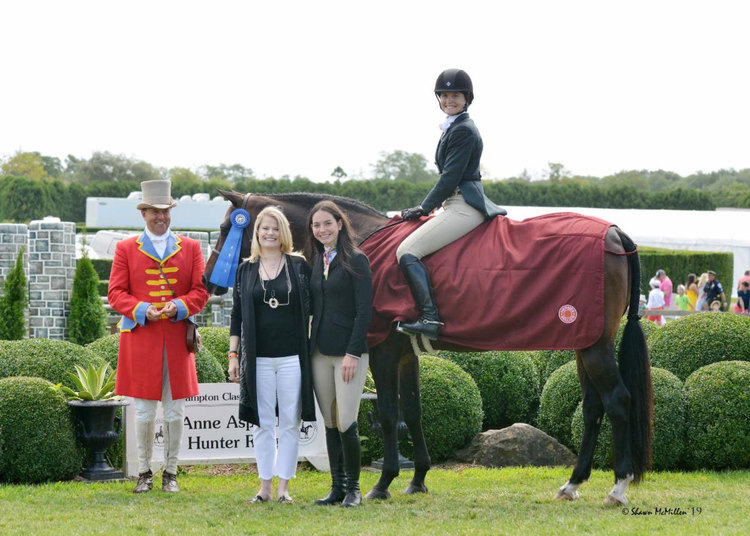 Stephanie Danhakl gave it her best shot but couldn’t quite repeat her clean sweep of the top three places in the $10,000 Hermès Hunter Classic from 2018. She had to settle for first, second and sixth instead, in the final hunter competition at the 44th edition of the Hampton Classic horse show.

Danhakl, originally from Pacific Palisades, CA, is currently finishing her PhD in Art History at Boston University. Following two challenging rounds, the final scores were incredibly close. Danhakl took first on Enough Said with a two-round score of 175, second on Golden Rule with 174 points and sixth on Quest with 170.50 points. Ella Bikoff and Cabrio took third with a two-round score of 173.75.

Stephanie Danhakl took the top two spots in the $10,000 Hermès Hunter Classic, the final hunter class of the 2019 Hampton Classic Horse Show. The blue ribbon went to her mount Enough Said. © Shawn McMillen
“I found the courses to be quite tough this year,” remarked Danhakl following the awards. “There was a bending line by the VIP tent which had uneven footing – it was up and downhill – and I kept losing count of my strides. I really had to rely on my horses and ride off my eye to get it right. Thankfully our strength is consistency, and the fact that I have been doing this for so long that I don’t really get nervous anymore. I put my complete trust in my team and my horses, and they always get it done. I’m so lucky and blessed to be able to keep showing them here at the Hampton Classic.”

The final Hunter Championship awards of the Hampton Classic were presented following the completion of the Hermès Classic.

Elli Yeager was named Best Junior Equitation Rider. Trained by Missy Clark and John Brennan, she was awarded the “Gordon Wright Trophy,” sponsored by the friends of Gustav Leidlof. In winning one of the Classic’s subjective awards, Yeager was chosen by the judges rather than ranked by points won to receive the award.